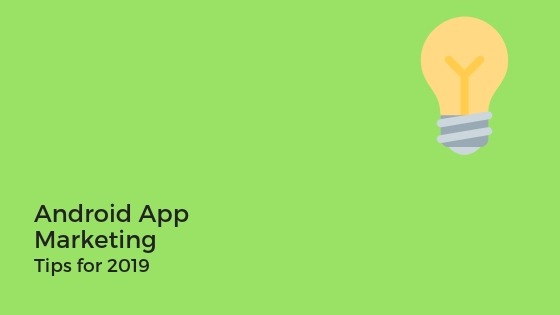 2020 is here and to offer you something special, here are some android app marketing tips for you!

Making an app known and getting downloads is one of the key tasks of a good android app marketing strategy to achieve the desired success for your project or customer.

Currently, you invest most of your time as an application developer in developing the product and meeting the deadlines you set or agreed with your customer. If you talk to any freelance programmer, he will surely tell you that he doesn’t have time to do all the testing he wants and that he leaves the mobile marketing for the time after he finished the app. Maybe app advertising isn’t your strong suit. As a programmer or designer, even if you know that advertising and promotion of your app are fundamental, in the end, you are exhausted and don’t invest time and resources in it. It’s not right to rest and let this happen in the end.

Android App marketing can be defined as the marketing of an application that is installed on mobile devices such as smartphones or tablets. App Store Optimization (ASO) is indispensable for effective app marketing so that as many users as possible can find your app quickly. Marketing requires the use of suitable keywords with handy descriptions so that the ranking in the App Store and also in the search engines increases.

This is very important because around nine out of ten downloads are carried out via an organic search in the Play Store. No more than 4000 characters may be used as a description, so a clear, concise functional description of the app is very important. Other positive aspects of the ASO are that both the number of downloads and the traffic to the website are rising sharply.

Google’s Analytics Keyword Tool can help to find suitable keywords because it can not only be used to research popular keyword suggestions for websites, but also for apps.

An important aspect of app marketing is to narrow down the target group before publication. The usage behavior of a tablet user, who mainly takes more time for the details of an app, differs from that of a smartphone user, who is primarily concerned with speed.

The production of a first-class video that briefly explains the core functions of the app is also part of the marketing process. In addition, similar competitor products should be tested and checked before the market launch in order to compare the scope of services, their keywords and the price level with the own app.

Another success factor of an app is to search for ratings and comments of other users. If there are negative ratings, you must react quickly to programming errors or usability optimizations in order to provide updates. The app must also be responsive so that the application adapts flexibly and automatically to different display sizes.

A professional icon design should not be missing, after all, the first visual impression contributes a lot to distribution and sales promotion. If foreign materials are integrated into your app using videos, images or texts, licensing and copyright must be clarified in advance.

Topics such as app store optimization, temporary promotions or referrals by active and convinced users (referral tactics) should be just as much a part of the standard repertoire of app developers as a meaningful name, a suitable logo or the localization of app store descriptions and apps. But what other possibilities do app marketers have?

The fact that an app is “viral” is unfortunately very rare. Unfortunately, hope and belief in one’s own “product” are not enough. An app is actually a product – with all the implications that go with it from a business point of view. This also includes the calculation of marketing budgets. It is not without reason that we very often see content recommendations, social media advertising and video ads on Youtube or television for the most successful gaming apps. These companies invest in their product and calculate exactly the ROI (Return-On-Invest = How much turnover did an ad campaign actually generate?) or the LTV (Life-Time-Value = How much turnover did a user generate over the entire period of use, for example through in-app purchases?) for each individual measure. Since the most successful companies often generate revenues in the hundreds of millions, they can achieve considerable advertising pressure. Startups, on the other hand, have to start with a much smaller budget. It is therefore important that they check very carefully which channels make sense for them and what they get back for every euro they have invested. But it won’t work without investment.

With thematically appropriate content, new users can first be enthusiastic about a topic and then converted. Targeted communication helps to increase user interaction and encourage them to actively use the app. The first step is a dedicated blog in which the topics related to the app are reported regularly and in a professional manner. Whether education, travel or efficient working: Many app providers already rely on this channel. There is an inspiration on the blogs of numerous fitness apps such as Runtastic, Freeletics, 8fit or BodyChange. Their magazines are edited by content teams and can certainly compete with the offerings of larger publishers. On these pages, however, the app providers do not report on the app, but on new fitness trends, the right diet and general well-being.

The purpose of creating content hubs or appealing landing pages is to reduce costs. In general, articles that deal with certain topics separately from the actual product are clicked on much more frequently than direct product pages or download links. App providers can thus reduce the click price and thus the cost of the first contact with the brand. The conversion of the website visitor becomes decisive, especially on mobile devices. Smart app banners that appear above the actual page and link directly to the app store are not perceived as intrusive but are still very effective. Clear CTA (Call-to-Actions) such as “Download the app now” in button form is also among the best practices.

Social media and search are often used in online advertising. However, there is also a very high advertising volume on these channels. Many competitors are already active on these channels and you have to compete with them. This drives up prices. Click prices of several euros on many popular search terms make a positive ROI for a newcomer app very unlikely. In addition, search ads are not suitable for all apps, but can only be recommended for those that solve a problem, such as apps for finding service providers such as tutors or craftsmen. It, therefore, makes sense to open up further distribution channels. Depending on the target group, different options are available. Exclusive partnerships with niche theme portals appeal to top target groups. Marketing platforms and networks permit a broad distribution. In addition, influencer marketing, for example, is very suitable for the promotion of gaming apps. However, it is always important to ensure that sponsored content is clearly labeled.

For any marketing activity, tracking download numbers or in-app purchases is critical to calculate the exact ROI or LTV and adjust its strategy. For example, providers such as Appsflyer, Tune, adjust, Kochava, App Annie or Etracker offer the right solutions. The tracking insights help companies to optimize their customer approach in addition to the conversion funnel. Customers can thus be reached in an even more targeted way, which has a positive effect on the conversion rate and turnover. By analyzing the data, app marketers gain valuable information for further marketing tactics. iOS users differ from Android users in their usage behavior. For example, they are more willing to make in-app purchases. These findings can be used for promotions. By the way: A marketing trick for content hubs was also used in the title of this article: Odd numbers arouse more interest than even numbers and tips also achieve above-average performance – did it work?!

But even with all these tips, you still should go international with your app, so here are some further tips for international app promotions:

Tips for the international marketing of apps

On our planet, there are about 6500 different languages spoken and the market for mobile apps is growing in all countries and regions of the world. It is estimated that by 2022 the number of downloads of apps worldwide will be almost 259 billion. For companies and app developers who want to position their apps internationally, here is a small overview of the most important factors to consider when marketing your app in multiple languages.

Localization: the adaptation of the app to the cultural and linguistic peculiarities of the respective market

Marketing an app worldwide is a big challenge. But with good research and preparation, international success is possible.

App marketing is playing an increasingly important role in the course of the digitalization of society and the exponentially increasing use of mobile devices: Projections assume that by the 2020s at the latest, apps will generate sales of over 200 billion US dollars. The increasing relevance of app marketing is also linked to the fact that the market for apps is already highly competitive, even to the extent that it tends to become increasingly confusing. The efficient placement of a newly developed app is thus becoming increasingly difficult. Despite the enormous competition, the Android app marketing tips presented here will enable you to set your apps apart from the crowd.

This website uses cookies to improve your experience while you navigate through the website. Out of these, the cookies that are categorized as necessary are stored on your browser as they are essential for the working of basic functionalities of the website. We also use third-party cookies that help us analyze and understand how you use this website. These cookies will be stored in your browser only with your consent. You also have the option to opt-out of these cookies. But opting out of some of these cookies may affect your browsing experience.
Necessary immer aktiv
Necessary cookies are absolutely essential for the website to function properly. This category only includes cookies that ensures basic functionalities and security features of the website. These cookies do not store any personal information.
Non-necessary
Any cookies that may not be particularly necessary for the website to function and is used specifically to collect user personal data via analytics, ads, other embedded contents are termed as non-necessary cookies. It is mandatory to procure user consent prior to running these cookies on your website.
SPEICHERN & AKZEPTIEREN